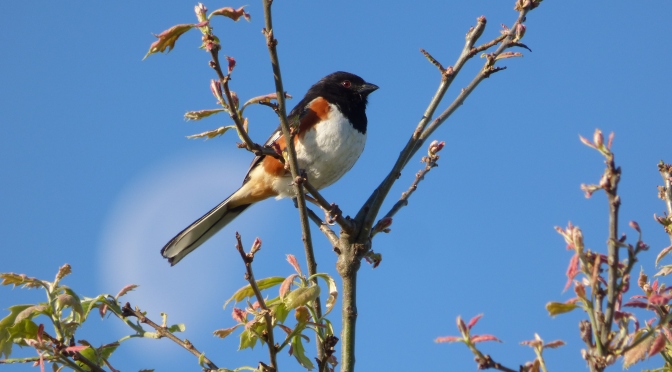 The Eastern Towhee is a large member of the sparrow family at home in forests and edge habitats of the eastern United States. They have a black back and head, white underside, orangey sides, and additional white markings on their tail and wings.

Where do you find Eastern Towhees?

Eastern Towhees can be found in a variety of habitats in the United States (typically with thick underbrush). Some of these habitats include but are not limited to deciduous woods, coniferous woods, scrubland, overgrown fields, and backyards. Eastern Towhees reside in the eastern half of the United States living in teh southeast year round and moving to other parts of the country in summer and winter. They are typically not found farther west than Texas and the Dakotas.

Are Eastern Towhees rare or common?

In their expected range, Eastern Towhees are fairly common and can readily be found in the proper habitat. These birds are generally numerous and are of a low conservation concern. However, in some parts of the country, Eastern Towhees may be considered uncommon or rare.

What is the difference between an Eastern Towhee and a Rufous-sided Towhee?

What do Eastern Towhees eat?

Eastern Towhees have an extremely varied diet consisting of a staggering array of food items from seeds, to fruit, to insects, to buds and flowers. This species will feed at bird feeders, typically opting to forage along the ground rather than perching on the bird feeder itself.

How do you attract Eastern Towhees to your yard?

Eastern Towhees will come to yards with habitat that makes them feel safe and comfortable. This would include plenty of ground cover in addition to a reliable food source. Planting thickets, shrubs, and trees near a feeding station will create an inviting oasis for Towhees and if this area is in their native range, the odds of a Towhee coming to visit are fairly high.

What does it mean when you see a Towhee?

Some cultures believe that Eastern Towhees are symbolic of good luck coming in the future. They are also seen as a guide of sorts. However, this belief does not seem to have permeated popular culture the same way that similar beliefs have surrounding other species such as bluebirds and cardinals.

How long do Eastern Towhees live?

Eastern Towhees lifespans will vary depending on location and habitat. The oldest individual of this species on record was approximately 9 years old.

What is special about Eastern Towhees?

Overall, the Eastern Towhee is unique for a variety of reasons. Among sparrows, it is on the larger side and its coloration is unlike any other birds of its kind with the exception of the Spotted Towhee (which was once lumped together with the Eastern as a singular species). They can be incredibly secretive and reluctant to leave their hiding places, but can sometimes be very conspicuous if they are in the right mood.

If you enjoyed this post please subscribe to our site to be notified of new posts. Also, check out the Badgerland Birding YouTube for videos about all things birds and birding.