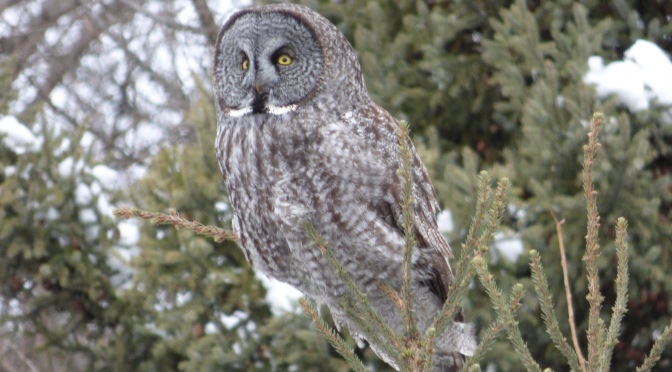 Derek and I traveled to the legendary Sax Zim Bog for a weekend of birding with Bill, Alex, Barry, and Rob. The day started at 9pm on Friday when we met up with Bill and Barry and began the seven hour drive northeast.

Upon arriving we met up with Rob and Alex and waited for first light to signal the start of what would be one of the best birding days any of us had ever had. The action started almost immediately when we went to McDavitt road. We quickly spotted the silhouette of a Great Gray Owl (a bird most of us had never seen in real life). After watching the owl fly from tree to tree we moved on to check other stretches of road before day officially broke. We found another Great Gray but the lighting was still too dim to get a photo with any detail.

As the sun rose high enough to give better views of our surroundings we headed to a known Sharp-tailed Grouse lek. On our way we encountered several American Crows, Common Ravens and a Northern Shrike perched high up in a tree. On a road a bit closer to the leking site we encountered another Great Gray Owl and a Ruffed Grouse.

At the field where the Sharp-tailed Grouse were performing their courtship dance, several cars were already parked along the road side. We could see the grouse far out in the field but noticed that some of them were under a feeder closer to the road. These birds offered great looks as they fed. In addition to the grouse, Black-capped Chickadees and Common Redpolls were also visiting the feeders.  On the other side of the road a Pine Grosbeak was calling from the top of a tree.

From the lek, we moved on to Warren Nelson Memorial Bog to search for woodpeckers. We walked on a trail worn in the snow by numerous people searching the forest. After walking a short distance we noticed a bird high in the tops of the pines. It turned out to be a Gray Jay, one of the most inquisitive birds in the forest. We pressed on and heard tapping on trees from time to time but couldn’t seen to peg down where it was coming from. With the cold starting to get to us we were about to turn back when Derek decided to go a ways further. He was able to locate the American Three-toed Woodpecker working its way up a tree. As we looked at it, three more Gray Jays flew in and watched us curiously. Shortly after, Rob was able to find a Black-backed Woodpecker on the trail and pointed it out to us.

After a quick lunch we went to Mary Lou’s feeding station where there were Common Redpolls, Black-capped Chickadees, Pine Grosbeaks, and Evening Grosbeaks. The Evening Grosbeaks gave us great looks but the Pine Grosbeaks stayed relatively far away. From there, we went to the visitor center where we were able to pick out one Hoary Redpoll in large flock of Common Redpolls. On the way to the center we had a lucky sighting of a Black-billed Magpie flying over the road.

Feeling good about finding most of the birds we were looking for, we cruised along roads where Northern Hawk Owls had been seen. After an unsuccessful drive down Stone Lake Road, we saw cars parked along the roadside with people outside taking pictures. We rushed over to the group who was looking at a very well hidden Boreal Owl. We did our best to get a clear shot of the small bird through the thicket of branches it was nestled in.

After that, we went back down McDavitt Road where a different Hawk Owl had been spotted. We once again struck out but were able to find a very cooperative Great-gray Owl that perched on top of a tree and gave us fantastic looks before eventually flying further into the woods.

Later, we made one last effort to find a Northern Hawk Owl. We looked as hard as we could, checking the tree tops until the sun started to set. We gave up and started heading back to our hotel when we noticed the bird sitting on the peak of a deciduous tree. We excitedly got out and started taking pictures. All of the sudden, the bird took off and flew in a low bush across the road significantly closer to us than it had been before. After getting even more photos we were ecstatic about all of the different species we had seen. The only target bird we still needed was Boreal Chickadee. For that, we knew we would have to go even farther north. Overall, most of us ended up with several life birds and all had an incredible day birding. 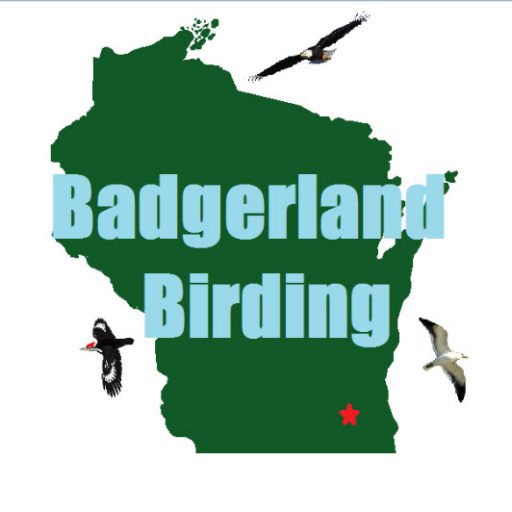