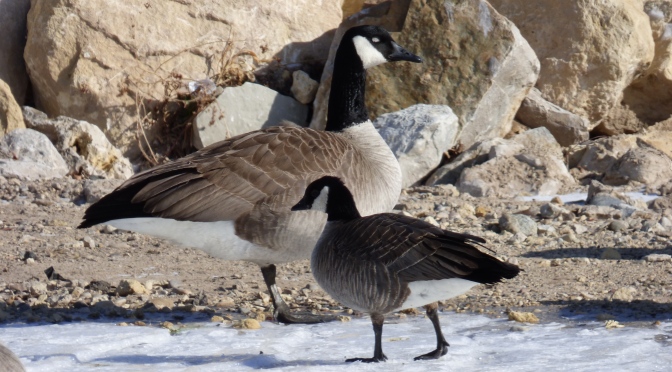 Almost everyone is familiar with the loud and abundant Canada Goose. Even non birders can pick out the familiar brown bodied, black and white faced bird best known for it’s v-shaped migratory pattern and its reputation for being easily irritated by passers by. However, there is another bird closely resembling the Canada Goose that makes its way across North America during migration: The Cackling Goose.

The next distinguishing feature to note is the bill. The Canada Goose’s bill is long and gently sloping to give it a more pointed appearance. The Cackling Goose’s bill is stubbier and slopes down more rapidly; giving it a more triangular appearance. The Cackling Goose’s shorter bill is one of the key features that can be diagnostic in the field even when there are no Canada Geese nearby to compare with.

Much like bill length, neck length is also a key feature that differs in the two species. The Canada Goose has a comparatively longer neck than the short neck of the Cackling Goose. Even when fully extended, the Cackling Goose will still appear to have a shorter neck. This feature can be slightly deceptive as Canada Geese can appear to have short necks when they are resting and length can be largely dependent of position of the bird..

There are a few other less noticeable features that differentiate the species as well. One thing to look for is primary projection. The wing tips of the Canada Goose typically do not stretch as far beyond the rump as those of the cackling Goose. This gives the Cackling Goose a slightly more elegant appearance.

The size and shape of the head can also be used as a diagnostic tool. The Canada Goose’s head is larger and has a more gentle sloped angle from the back of the head to the front. The Cackling Goose has a smaller and more rounded head.

Canada Goose vs. Cackling Goose can certainly be a challenging ID. Since most of the differentiating features are comparative, it can especially difficult to make an identification when there are no other birds around for perspective. With both species varying wildly in size due to many subspecies, no one characteristic should be used to disseminate the two. Instead, all characteristics together can help paint a clearer picture of which birds are Canada Geese and which are Cackling Geese.