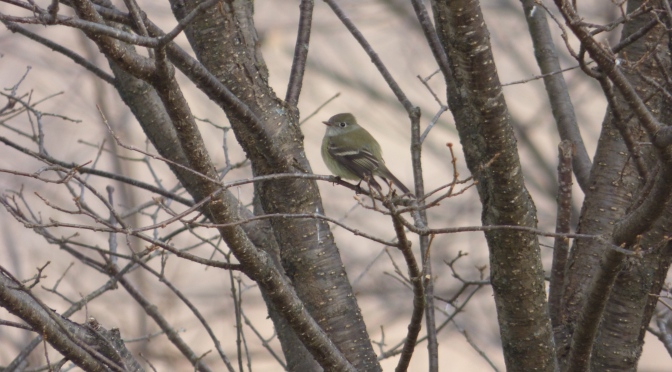 For a few days, a rare western visitor had been seen in Iowa County Wisconsin: the Hammond’s Flycatcher. The Hammond’s Flycatcher is a species of least concern in its natural range spanning from the Pacific coast of the United States to the Western portion of Nebraska. However, this species is almost never seen in the central Midwest, let alone Wisconsin. The Flycatcher had been appearing for brief windows of time and then vanishing into the thickets behind a house on a rural road. Other birders reported that once it disappeared, it would be gone for a number of hours before returning; making our timing incredibly important.

Derek and I had planned on leaving around 7:30 am and arriving at about 9:30 to give ourselves enough time to search. Yet again, our original plan was foiled by the fact that we accidentally slept in until about 9. We eventually got on the road and headed toward the small town of Avoca in hopes of relocating this elusive bird.

As we drove through the countryside passing Madison area in the process the skies changed from clear blue to cloudy with billows of fog hanging above us. We had been optimistic about finding Golden Eagles soaring over the ridges on the way to our target bird but the lack of visibility made it almost impossible to look high enough into the sky.

When we finally arrived, several other cars were parked on both shoulders of the road in front of the house, and birders were out of their cars milling about. When we parked and got out of the car, another birder walked past us and said that the Flycatcher was in the crab apple tree in the front of the yard. We excitedly picked up the pace and got eyes on the small bird fluttering low in the bushes. As we watched, other birders told us that some of them had waited more than 2 hours for the Hammond’s Flycatcher to arrive.

The Flycatcher appeared to be very lively even with it being so far out of its normal range. With a bird straying far from its migratory path there is always concern about the birds health and well-being. Especially for a bird that usually feeds on insects finding itself braving a Wisconsin winter. Nonetheless, the Hammond’s was actively feeding on something as it appeared to be hawking insects too small for us to see. It jumped and fluttered from a crabapple tree in the front yard, to a small bush, to the ground, and eventually out of sight behind a shed. We waited for ten more minutes after the bird departed but it never came back into sight.

Feeling excited to add the Hammond’s Flycatcher to our life lists, we decided to try and catch a glimpse of a Golden Eagle on the way home. Much of the fog had evaporated away and the raptors had begun taking light. We noticed a Bald Eagle flying overhead as well as another one feeding on a deer carcass. A Rough-legged Hawk was perched on a telephone pole in the distance, and we passed two American Kestrels off the highway.

Suddenly, Derek noticed a large bird soaring low to the northeast of the road. We were able to get quick pictures of it as it continued east. The bird turned out to be an adult Golden Eagle. We followed it east until it climbed over a ridge and disappeared out of sight.

In all, we were gone just over five hours and found two rare birds. The Golden Eagle is an annual but occasionally tough to find visitor. The Hammond’s Flycatcher (if accepted by the records committee) will be a state first. It was a fun day to be out in Wisconsin searching for birds.