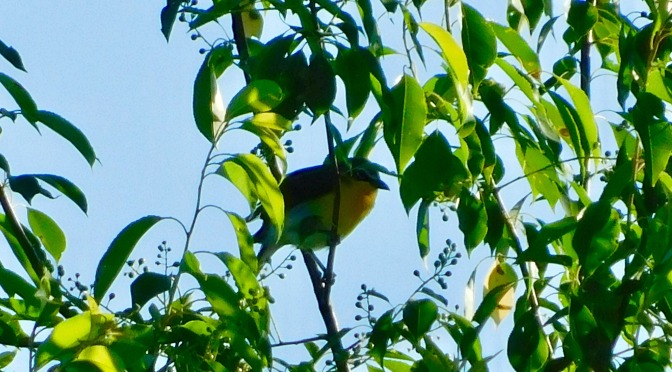 Last Sunday (June 3, 2018), I decided to sample a few areas in the southern part of the state in both Dane and Sauk Counties. The trek began early in the morning at Brooklyn State Wildlife area located just south of Madison in Dane County. Several Field Sparrows perched up on my way down the trail. I was also serenaded by the songs of Brown Thrashers, Blue-gray Gnatcatchers, and Eastern Wood-Pewees. It wasn’t until I walked about half a mile in that I heard the distinct mewing and catcalling of a YELLOW-BREASTED CHAT. I was able to locate the bird singing near the top of a nearby tree hunkered in it’s leaves.

This bird, about the size of a grosbeak, is often heard and not seen due to their elusive nature. Chats are found in areas with dense brush, such as thickets and forest openings and primarily seen in the southern part of the state. The Yellow-breasted Chat was once considered to be in the Wood Warbler family, but in 2017, this species became the only member of the Icteriidae family.

After being satisfied by a decent show from the Chat, I moved north to Sauk Prairie State Recreation Area. This area was formerly the Badger Army and Ammunition Plant, at one time the largest manufacturer of munitions in the world. The drive down the main road yielded some decent open country birds such as Eastern Meadowlarks and Clay-colored Sparrows. Most notable was a singing BELL’S VIREO not far from the entrance. After driving a few miles into the property I made it to the dense brush I was looking for. A singing WHITE-EYED VIREO sang its harsh, rapid song. Unfortunately, the bird never made an appearance before the wind picked up and activity died down.