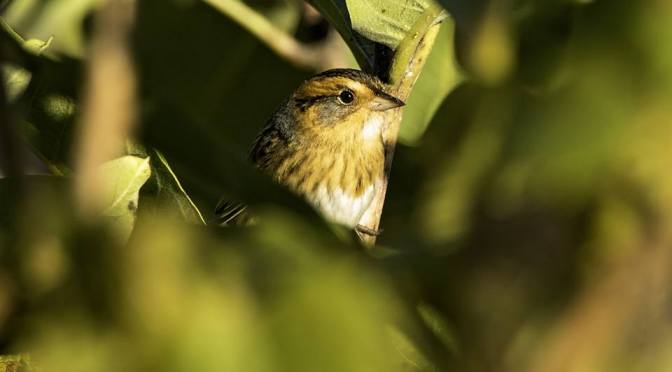 During fall migration, birders flock to their favorite weedy fields in search of migratory sparrows. While there are plenty of species to see, two of the birds at the top of the list are Nelson’s Sparrows and LeConte’s Sparrows. Both the Nelson’s and the LeConte’s are Ammodramus sparrows, perfectly at home skulking around in tall grasses and often only visible when flushed. Since these sparrows are quick moving and elusive, it’s important to know the key points to look for in order to make a positive ID.

A birder walks through a field of tall grass when suddenly a small bird kicks up for two seconds only to disappear back into the thick foliage. Was that a Nelson’s or LeConte’s Sparrow? Or was it something else entirely? Knowing some things to look for in a situation like this can narrow it down a bit. Both Nelson’s and LeConte’s have  a compact appearance with a short, worn looking tail. They also have notable orange features on their face that most other birds lack. For Nelson’s, their dark gray coloration on their cheeks and nape can be seen even in flight. For LeConte’s, their buffy color and brighter orange is notable.

When perched or relatively stationary, some ID points separating Nelson’s and LeConte’s Sparrows become more evident. One such feature is the nape. The nape of a Nelson’s Sparrow is solid gray. LeConte’s Sparrows have a pinkish brown nape with noticeable chestnut streaking. This may sound like a tiny detail, but when looking at the two images below, the contrast is easily visible. 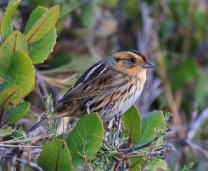 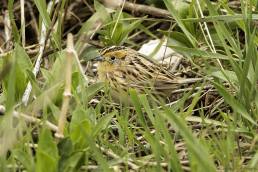 Out of all the distinguishing features between these two sparrows, the most reliable may be the stripe of the top of their head. Nelson’s Sparrows have a dark gray head stripe while LeConte’s Sparrows have much lighter white or cream colored stripes.

These birds can be tricky to identify in the field in large part to their skulky and elusive nature. With these tips it may be a bit easier to discern the two species. Armed with knowledge, start checking damp, weedy fields to see if you can find one of these migratory birds!

One thought on “Nelson’s Sparrow Vs. LeConte’s Sparrow”